I had bought a package of gingersnaps. I don’t usually buy cookies, whether they are in a bag or not (because I’d rather make them). But the fact they they come in a bag makes them highly suspect.  I NEEDED them for a recipe. I really did. The recipe which turned out rather ok was for Pumpkin Cheesecake Stuffed Snickerdoodles by Willow Bird Baking which you can find here  I’m not gonna post them because she did such a great job the first time out, why bother? Also I only used the stuffing part of her recipe as I already had a snickerdoodle recipe.  But back to the gingersnaps and the reason I’m posting at all! 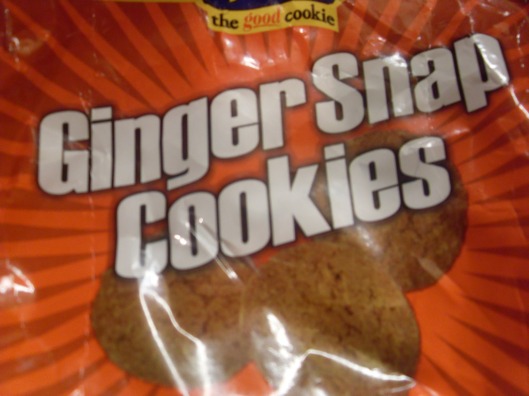 Jason is EATING the gingersnaps that were left over from the snickerdoodle affair! NOOOOOOO.  I must make something out of them….. I had recently attended an office party and someone’s wife donated a big box of apples.  Donated is a kind word, I think she actually just wanted to get rid of them.  So I took 6 last week and made an apple coffee cake for my friend’s birthday. It was really good but I don’t think I took pictures and I didn’t post it.  It was moist and delicious and I even used concentrated apple juice with brown sugar to make a drizzle for the top! Yum.  But I digress, as usual, you try living in my head!  I was back at that office this week and no one really took any apples…so I took a few (or 5) more.  APPLE PIE with Gingersnap crust?!  Why not?  People make graham cracker crust don’t they?

Internet research here I come!  See, I usually will check around and see if others have made what I’m trying to make (which is usually yes or some version thereof) and I found a few gingersnap crust recipes.  So it has been done. Perfect!  But…I forgot the research part.  I usually read through quite a few versions and decide what way I want to try it. But this time I went with the first recipe I came across and just started right in. BIG MISTAKE.  I KNOW this, it’s happened before, why did I do it again?  I guess I thought it would be pretty basic and easy.   Hahaha.
So here is how you should NOT make gingersnap crust…

Preheat oven to 350.  It said to mix all the ingredients together and press into a pie pan and up the sides. I should have known when the sides didn’t really want to stay put. But I perservered, put it in the oven for the recommended 15 mins and when I looked in….Oh no….oh no….(just look at the picture)  pools of butter, fallen down sides. *@#! (Insert all the swear words known to man) I tried pressing the sides back where they should be with a spoon and stuck it back in the oven for probably another 15 minutes….same result.  So I persisted anyway, I don’t admit failure easily….I’m making a d#*! pie. 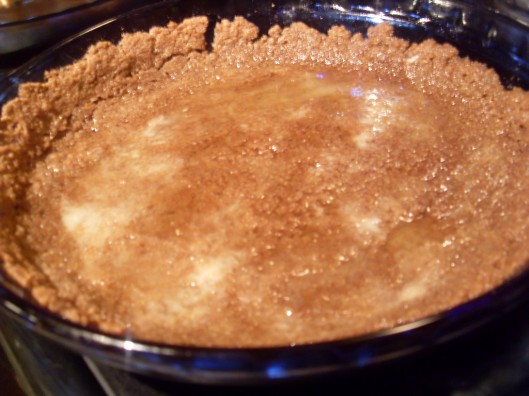 The filling…the filling was very good if I say so myself.

As you’re slicing the apples into a bowl squeeze lemon juice on them.  The lemon brings out their flavor, don’t worry, you won’t really taste it. (I used the cuisinart slicing blade attachment and got really small, thin slices of apple).  Mix together the sugar, flour & spices and sprinkle over the apples, mix it up.  Smell the Chinese 5 spice powder first to make sure you’ll like it.  I put in 1/2 tsp and then added more so the 3/4 tsp is just an approximation. I like how it smells, kinda clovey and almost licoricey from the star anise.  If you don’t want to be daring then use cinnamon & some ginger, clove, allspice (whatever you like really) DON’T leave out the pepper.  You will not notice it, but it does add something. Try it!  Anyway, I placed the apple slices in the messed up pie crust. (Hopefully you will have a better crust to put it in, do some research).

Then I made crumbles for the top so it was like a dutch apple pie. 1/2 cup flour, 1/2 cup brown sugar & 1/2 cup butter. Mix them toether with your hands until it’s very crumbly and then put over the top of the apples.  Increase the oven temp to 375 and bake for about 45 mins depending on your oven.  You want the top to be golden and the apples to be tender.

The pie tasted wonderful.  It was a bit too buttery for my taste but the friends I had over to experiment on loved it and had seconds! Slicing the apples so thinly made the filling soft and almost custardy, instead of the usual apple chunky slices in most pies.  So…. keep the filling, work on the crust. I still want to do a gingersnap crust.   (Sorry only got a picture of the outside, it got eaten before I thought of taking an inside pic!)

I am not defeated, maybe a bit bruised.