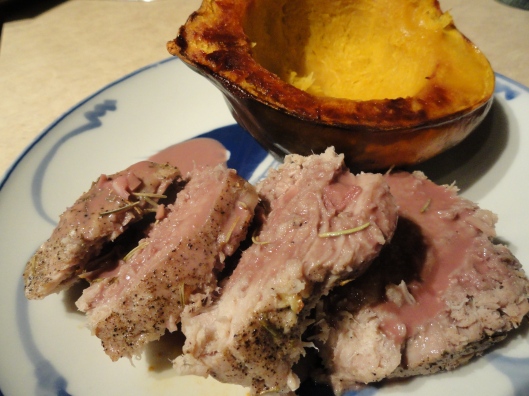 So yummy!I got this recipe from a Williams Sonoma catalog of all places. The catalog came into my work and a friend of mine who also likes to cook (as well as fantasize about all the cookware in said catalog) told me that she had made the recipes from the catalog before and that they were pretty good. I decided to give this one a shot and am really glad I did, so is Jason.

It’s been modified a bit, for example the actual recipe uses white wine and Burgundy mustard. I had neither at the time so I used red wine and dijon. It was delicious. So here goes. You will need a dutch oven to make this or some kind of oven proof pan with a lid. I used my cast iron dutch oven and it was perfect as it put a nice sear on the meat.

Whisk together the wine, brown sugar, olive oil, mustard, rosemary & garlic. Brush the pork on all sides with the mixture. Cover with plastic wrap and let sit at room temperature for about an hour. Put the rest of the marinade in a saucepan and reserve.
Preheat the oven to 475 F. Place the pork in a Dutch oven, season with salt and pepper, cover and roast for 20 minutes. Reduce the temperature to 400 and continue roasting with the lid on for about 30-40 minutes. (Meat thermometer should read 145 when done). Remove from the Dutch oven and let sit while you make the sauce.

Pour the marinade into the Dutch oven and add the 1/4 cup cream. Bring to a boil on the stovetop until reduced (about 5 minutes). I’ve made the sauce without adding it to the roasting pan but it’s not as rich and delicous that way. The juices and browned bits from the pork add a depth of flavor, so I highly suggest you try it like that.

I served it with roast squash, I figured since the oven was on for the pork I might as well roast squash. I added the squash when the temperature was turned down to 400 and it took about 40 minutes for it to finish, which was how long the pork needed so that was good.  I served the squash with coconut oil and Fleur de Sel, yummy!